As 2021 exited the scene, forever recorded for all posterity; our attention is drawn to the myriad of victims and casualties left in the exit.  With voting rights under attack, “again” and the disenfranchisement of those marginalized by the powers that exist, turning “man against his brother” we are awakened. Once again, the roll is called of all who suffered loss in our nation because of divide us into red and blue states without consideration of the “human suffering” that crushes any “real hope” that “a change is gonna come.”

As exposed by those at the highest levels of leadership in our nation, the story that is both modeled and spoken, continues to be retold to our disadvantage.  A story of entitlement, at the expense of the least, lost, left out and underserved. There is no new story, but a recycled version of “His” story, exposed and cast before the seat of democracy in the nation’s capital.  An old, old story with the same characters, parading themselves before the whole world and daring to even hint at accountability.

On January 6, 2021, those who believed they were acting in “good faith” revealed the true character of those who have always operated on the fringes of the law. Moving with the precision of a “surgeon”, they showed the whole world, the “real soul of the nation,”

Real freedom eludes those who desperately attempt to cope with the reality of a nation, exposed at the core of its disdain for anyone or anything that seeks a “level playing field.” Today, with COVID-19, variants, unemployment, food deprivation, climate change effects, and the lot, “His Story” continues to be written almost at the cost of any human dignity or empathy for those who need it most. The real Black History is pushed aside and trampled underfoot by those who wish to hide the obvious lack of credibility of the cowards, responsible for the well-being of those they have been elected to serve.

The “His-Story” of Black History once again is left to the pundits and talking heads, to explain the “how did we get here” to those who already know the answer; we’ve never left, “here!”  Once again, our Black History Month reflects the crumbs that fall from the rich man’s table. Our cooling off period, as a new, but familiar continuation of “His” story ignores that pain and horror of watching George Floyd and so many others fall prey to this never-ending story of the struggle to “finally be Free.”

The total disregard of oversight and accountability now rests in the hand, feet, and voices, who stand in unity. Uniting the Nation to see through the smoke screen of “His” story while creating the narrative for change. Once again, exposed, Black History demands an audience who will be the consciousness of the nation as we make Black History relevant in times like these.

Black History never forgets that the legacy we are leaving, shall bear the scars of a journey well spent. Our rear-view mirror has been replaced with a generation of “warriors” who will ensure “Our Story” is both told and realized. There is a fresh wind in the air, that will not draw us back into “His Story.”  We will no longer hide in the fear of past but will pass the torch of “Our Story” burning bright, with a hope that will forever gather the least, and the left out to turn the darkness of “His-Story” into a gathering of unlimited potential as we uplift our song of freedom, even in this “Strange Land.”

This new year affords an opportunity to change the narrative, by not continuing to gather strength from the past. The shoulders on which “Our Story” gains strength will not allow complacency or a false sense of “victory.” Courage coupled with a commitment toward unity and diversity will be the armor that shields us from awakening the demons of Jim Crow, Bull Conner, and the like. Those ghosts of the pass will bow to a new and passionate army, which will raise the flag of brotherhood, compassion, solidarity, where the walls will come tumbling down and bridges of hope will be erected.

We will not go quietly into the night; “Our Black History” will deliver us into the hands of Liberty and Justice for All.

Pastor Michael E. Grady is the pastor of Prince of Peace Christian Fellowship Church in El Paso, Texas and past president of the El Paso Branch of the NAACP.  He was born and raised in St. Louis, Missouri and retired from the United States Army, while serving as the Reserve Chaplains’ Training Advisor at the U.S. Army Chaplain Center and School, Ft. Monmouth, New Jersey. During his time at Ft. Monmouth, New Jersey, he also graduated from of Monmouth Bible Institute, Farmingdale, New Jersey.  He currently serves as a contributor to the Black Roundtable and is a mentor to many. Pastor Grady resides in El Paso, Texas with his wife and children. 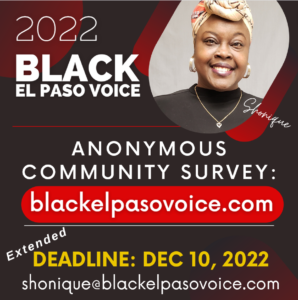 First Fridays with the FBI Podcast